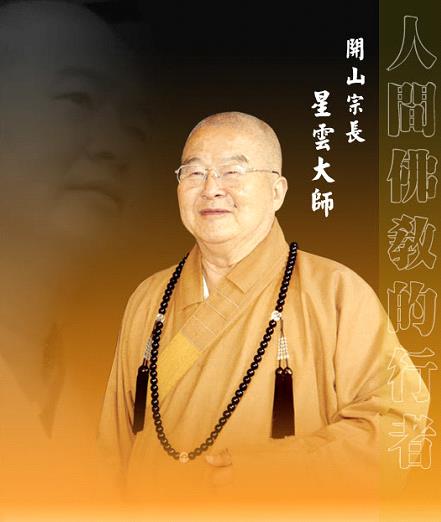 Venerable Master Hsing Yun was born in Chiangsu Province, China in 1927 and entered a monastery near Nanjing at age twelve. He was fully ordained in 1941, and is the 48th patriarch of the Linchi (Rinzai) Ch'an school. In 1949, amid the turbulence of civil war, he went to Taiwan.

In Taiwan, he began fulfilling his long-held vow of promoting Humanistic Buddhism, which takes to heart spiritual practice in daily life. With an emphasis on not needing to "go some place else" to find enlightenment, we can realize our true nature in the here and now, within this precious human birth and this world. When we actualize altruism, joyfulness, and universality, we are practicing the fundamental concepts of Humanistic Buddhism. When we give faith, hope, joy, and service, we are helping all beings, as well as ourselves. For nearly a half century, Venerable Master Hsing Yun has devoted his efforts to transforming this world through the practice of Humanistic Buddhism.

Venerable Master Hsing Yun is an outspoken proponent of equality among all people and religious traditions. The Order has the largest number of female monastics of any Buddhist order today. By providing and supporting educational and leadership opportunities, he has worked to improve the status of women in Taiwan. He has held full ordination ceremonies for women of the Mahayana, Theravada, and Vajrayana traditions. In addition, Master Hsing Yun annually organizes conferences to bring together the various Buddhist schools and to promote dialogue between Buddhists and other major religious groups.

Master Hsing Yun is a prolific writer and has authored over one hundred books in Chinese. His writings have been translated into English and many other languages. His works of the Life of Sakyamuni Buddha and the sixteen-volume Fo Guang Buddhist Dictionary have both won Taiwan's highest humanitarian awards. His biography Handing Down the Light, Hsing Yun's Ch'an Talks, The Lion's Roar, The Hundred Sayings Series, and The Humanistic Buddhism Series are published in Taiwan and are available in English. Being Good: A Guide to Buddhist Ethics, Only a Great Rain, Lotus in a Stream, and Where is Your Buddha Nature: Stories to Instruct and Inspire are published by American publishers and are in English. His numerous lectures also continue to be translated into English.

Based in Taiwan, Venerable Master Hsing Yun travels extensively. His insightful, engaging, and witty lectures unfailingly endear him to audiences. He reminds us that to transform our world, we must be actively engaged in it. "Community transcends the individual," he says, "and in doing so, fulfills the individual in the most complete way possible." Wherever he goes, he encourages people to unite both the local and global community into a world of complete equality, joyfulness, and perfect peace.